Welfare is all about quality of life

We would like every horse in Skyros to enjoy a good quality of life. As well as looking after up to 40 horses each year we also contribute to the welfare of many more by sharing our knowledge and expertise.

Through displays and workshops on horse management and care we teach a respectful approach to horsemanship, taking into consideration the horse’s psychology.

Since 2006 we have taken care of over 20 welfare cases ranging from elderly horses with problems such as Cushing’s, arthritis, laminitis and obesity, to younger horses with reoccurring colics, starvation, or suffering from abuse. In 2013 we were called out to a foal who had broken its leg in two places, but with the care and therapy she received from us she is now, unbelievably, fighting fit – see Georgia’s Story. 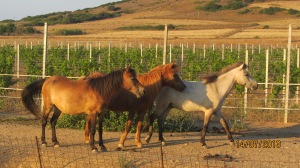 Pictured above are Milly, Nefeli and Ifestos. Milly was found on the mountain in 2007 near death from starvation with a foal at foot. Milly had problems with her teeth and a serious worm infestation. She was brought to us with her foal Effie, and after a lot of loving care and treatment survived and thrived. The chestnut mare pictured is Nefeli, whose owner died in 2009, and who since then has been in our care. She is a lovely old girl who has Cushing’s and stringhalt but manages very well.

We have been instrumental in coordinating and hosting the now annual GAWF visits (Greek Animal Welfare Foundation, now known as Animal Action Aid). We have also been involved in wider animal welfare projects including GAWF’s dog and cat sterilisation scheme. We also look after two rescue dogs, two rabbits, two goats, 13 cats and many chickens at the farm.

We work with Elliniki Etairia and the Skyrian Horse Society to ensure all horses on the island are immunised against tetanus and wormed twice yearly, funds permitting. We have also been integral in the development of a gelding scheme in Skyros.

Our actions are creating quantifiable change in the welfare of animals on Skyros. If you would like to support our vital work on the island, visit How You Can Help.